The MMMG is a highly prospective greenstone and has over 25M oz of gold endowment. Gold mineralisation in the Laverton district is often associated and hosted shear zones and by BIF in favourable structural settings. The Laverton gold project covers approximately 11km of strike of two shear zones and the under explored BIF. The tenements  cover the southern strike extensions of the historic Gladiator gold deposits, as well as the parallel Sunshine-Corio Shear Zone shear zone where gold mineralisation has been identified in historical workings and previous exploration including drilling results of up to 7.00m @ 15.90g/t Au. 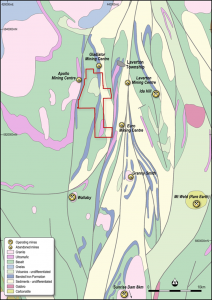 The target shear zones and  BIF’s have been relatively unexplored due to the presence of thin alluvial cover (~<5 metres) and recent magnetic data interpretation has highlighted a number of prospective targets where the BIF interacts with favourable NW trending structures, which are associated with gold mineralisation elsewhere in the MMMG.